In October 2011 Colin Williams contacted the Relief Fund for Romania enquiring if he could donate a number of cuddly toys to seriously disadvantaged children in Romania; he was willing to pay for the shipment abroad himself.

He was put in touch with the Relief Funds Romanian partners Fundatia de Sprijin Communitar (F.S.C.) and the toys were sent. After researching more about F.S.C. and the Relief Fund he followed up with the idea of visiting F.S.C. and bringing a barrel piano and its cart to play at events and collect donations. The visit took place in spring 2012 and Mr Williams was so impressed that he decided he would like to do something in memory of his wife Milly, who died in 2010 after suffering for 10 years from dementia. When she was still mobile she gained comfort and pleasure from buying the donated cuddly toys from the local shops.

It so happened that Ungureni Orphanage Trust, a residential facility for children with special needs, had been left empty after the beneficiaries had been moved into the city. Situated at Buhusi 24 km from Bacau, it had been for sale for nearly 2 years. F.S.C. was interested with a view to using it for integrated services but could not find the funding. Upon hearing of this Colin Williams wanted to help. He was put in touch with a trustee of U.O.T, Judith Darmady, and the transfer of ownership was discussed to turn it into a centre for the elderly to be called Milly Village. Colin Williams and Judith Darmady each put in Ł50,000 of their own money to refurbish the property and support it. Someone of a high calibre was needed to run the facility and it was agreed Lenuta Nastac was the best person to do so. She is paid by F.S.C because it is officially part of the Impart Training programme and it is the only cost to F.S.C. Impart Training programme staff and a physiotherapist were employed. Milly Village is now in the process of accreditation and if it is obtained help can be requested from the state. 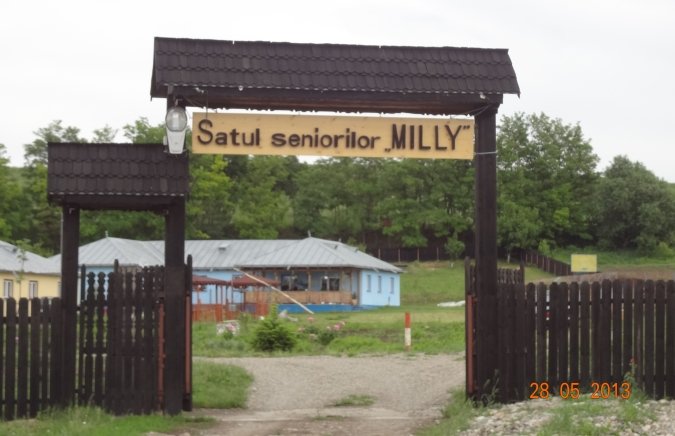 On 7 June 2013 Milly Village for Seniors was officially opened. The opening was attended by beneficiaries, volunteers, members of the community, friends, relatives and the media.

Aged from 58 to 93 years old, the residents receive expert care, healthy food, special diets and physiotherapy. Their mental wellbeing as well as physical is of prime importance. Exercises are recommended if appropriate and rest and leisure activities are planned. There is access to the telephone, internet, Skype, Facebook, TV and radio. There have been 30 residents so far and there are 50 on the waiting list. Care is paid for from residents pensions or families help out when they can afford to. If there is a shortfall of income Colin Williams makes up the deficit.

The health of the residents is carefully assessed upon admission and updated as necessary. A GP visits regularly, supervises the nurses and prescribes treatments The residents health is monitored daily. If there is an emergency the doctor is called and the ambulance comes quickly as one of the Milly Village employees used to work for the local ambulance station. There is a good partnership with the local hospital. Relatives are kept in touch and decisions are made whether to keep patients in Milly Village or send them to the local hospital.

Upon admission some of the elderly had bed sores and other ailments but the former have been eradicated and some inspiring stories came to light – see below.

Elena had a Polish husband and one child. She was married for 60 years and now has 9 grandchildren. At 94 she is still busy, making jam, dressmaking and knitting warm socks for the other residents. In the summer she also helps in the garden picking the vegetables. Elena was one of the first residents and came in March 2013. She told me she felt very well and was pleased with everything at Milly Village. She thanked everyone from the bottom of her heart and respects very much all the employees who look after her.

Xenia used to be a nurse. She was very pleased with everything and said Milly Village was located in a very nice place. The employees were very good and although she left a lovely flat and everything behind to move there she is happy and feels valued because other residents ask her advice and discuss things with her.

Great importance is set on relatives keeping in touch and visiting the Village. Only a few residents do not receive visitors. Some of the children and grandchildren of the beneficiaries are abroad in England, Spain and Italy but at week-ends those who can visit come to the Village and the gardens are sometimes full of family and friends from all around.

Physiotherapist Christian Timorous. He told me he only had one set of grandparents growing up but now he had 20 or more and loved working with old people. When I visited the physiotherapy room he was overseeing two ladies, Georgette and Valeria - one was receiving heat treatment on her leg and the other doing leg exercises on a pedal machine. Most impressive was a lady called Elena who had arrived in very poor health and could not walk. She showed me how she can now stand and walk a few steps holding the physiotherapists hands and she can also walk slowly with a walking frame. She was thrilled at her improvement.

The building itself is single story, light and well furnished with an attractive veranda and wheelchair access to the front door. Inside there is a large dining area adjacent to the kitchen, a spacious lounge for relaxation, 3 shower/toilets and 6 bedrooms holding 2 or 3 residents. There is also a well equipped physiotherapy room. There is a barbecue in the garden for the summer months.

The approach to Milly Village is along a driveway from the main road and at first glance the complex has the passing appearance of a ranch. A low wall with a boarder of colourful flowers surrounds the property and a large gate with an arch above displays a sign with the name Milly Village. Once inside, the spacious grounds are a profusion of flowers, bushes and small wooden seating areas with roofs for protection from the hot sun and rain. On the left are some small buildings which house 6 goats for milk and cheese, 2 pigs for pork, and 100 hens for eggs and eventually food. There is an area for growing vegetables and fruit and a gardener looks after the grounds and the animals. The latest addition to the self sufficiency of the Village is a fish farm which has recently been stocked and it is hoped it will soon provide fish for resident’s meals. The surrounding mountains and countryside make an attractive backdrop.

Phsiotherapist Christian Tomosoiu, Lenuta Nastac, carers, the gardener and visitor Elizabeth Winstanley from Relief Fund for Romania in the gardens of Milly Village.

The carers are cheerful, pleasant and obviously well trained. They spend time with the residents and encourage them to help in the garden and sometimes in the kitchen with the meals. Lenuta Nastac has many wonderful attributes and abilities. Her enthusiasm, warm personality and professionalism shine through. Milly Village is very lucky to have such a person in charge.

Milly Village is an example of what a home for the elderly should be modelled upon. I was only there for an hour or two but I came away uplifted and vary glad I had been able to visit the residents and staff and see for myself what Lenuta meant when she told me “we are a family here”