This is a report by our long serving Director of Programmes, Julia Smyth, who retired a few years ago but recently kindly agreed to visit the projects in Romania - most of which she had set up - and report on their progress.


ITS DEVELOPMENT AND LEGACY

This project was started in 1992 with a Mobile Health Centre in the form of a caravan adapted as a mobile surgery with UK volunteer doctors, a UK nurse/co-ordinator and Romanian translator. Medicines were provided free of charge and obtained from ECHO in the UK [a great specialist medical advisory charity sadly since reporteldy ruined by "consultants].

It worked in 14 remote, rural villages were there were no doctors. In the whole of south east rural Bacau county with a population of 27,000 there were but two doctors to whom the project also gave support and supplies.

One of the two Romanian doctors, Dr Tudor Rosu, obtained via RFFR a Royal College of GP’s travel scholarship to study rural General Practice in the UK. In 1995 Dr Rosu took over as project doctor and Gabi Achihai, the former translator took over as Co-ordinator. 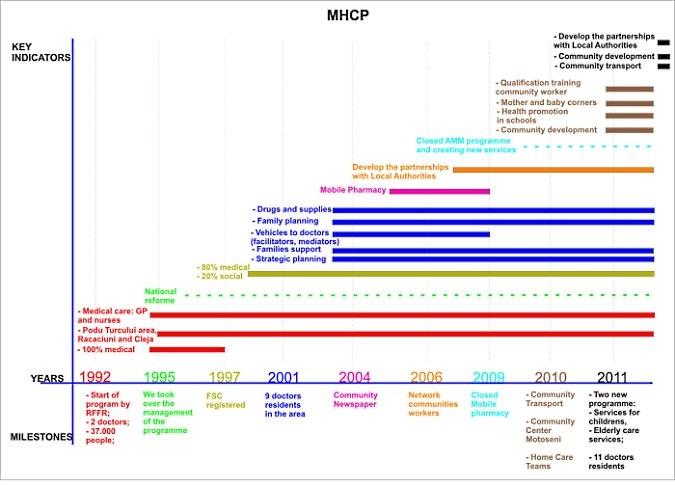 Beneficiary numbers start in 1997 at 900 with a peak in 2007 to 9,000 (introduction of Mobile Pharmacy) and currently running at around 4,000 p.a. The beneficiaries are the sick, elderly, children, poor families, Local Mayors and health workers. The projects have now developed to include whole communities.

This has been one of the most significant outcomes of the programmes in this area. FSC have successfully got the Mayors "on side" over the years of serving their communities and they now pay for the Care of the Elderly Rural Areas Home Carers’ salaries. In the early days, it was difficult to engage the mayors in any commitment to their communities and in many cases there was a distinct lack of concern for the plight of the rural sick, elderly and poor. Of course there were many claims on their funds and there was little precedent for primary care, home visits or home care. Now Mayors contact FSC directly and often for their help.

The Legacy of the MHCP

FSC’s main focus has switched from the original medical services to providing support to existing medical services, direct Home Care of the Elderly and social and educational support to poor families and their children in the projects listed above.

The Mobile Health Care Programme has acted as a seed project and has led to the development of health and social services in the area. It has: