This is a report by our long serving Director of Programmes, Julia Smyth, who retired a few years ago but recently kindly agreed to visit the projects in Romania - most of which she had set up - and report on their progress.

The FSC Volunteers Project began in 2004 with the aim of supplying help and support to FSC projects and engaging the younger generation, and others, in community awareness and development. At first, their main focus was on administrative tasks, help with fundraising and helping the children at Casa Pistruiatul. Most, but not all, volunteers are high school students.

Over nearly ten years the programme has developed to a sophisticated and effective level under the leadership of the very capable Gabi Mugureanu. His enthusiasm and cheerfulness are infectious though he runs a very "tight ship".

Development of the Volunteer Programme

The growth and development of volunteer activities can best be viewed on the attached activities graph. The Volunteer Programme and the volunteers have won many awards. Gabi Mugureanu, the Coordinator himself won the national award for best Coordinator of Volunteers in Romania at the National Volunteer Gala in 2012. This was a prestigious event which included nominees from international organisations such as Save the Children.

Training and supervision of volunteers

They are committed to a minimum service of 2 hours per week. In their first year they are known as "New Entry" volunteers and become "Performers" in their 2nd and 3rd years. The certificate below is issued at the end of 3 - 4 years volunteering at graduation when the volunteers become "Ambassadors". The certificate is signed and endorsed by the School Inspectorate and Director of the High School. Once Ambassadors, volunteers can represent FSC at meetings, events etc.

By 2012 this had increased to 280 volunteers serving 3,723 beneficiaries in 31,326 hours of work for the year.When Ivisited the number of active volunteers was 110 but some were on holiday and the schools have only just gone back. 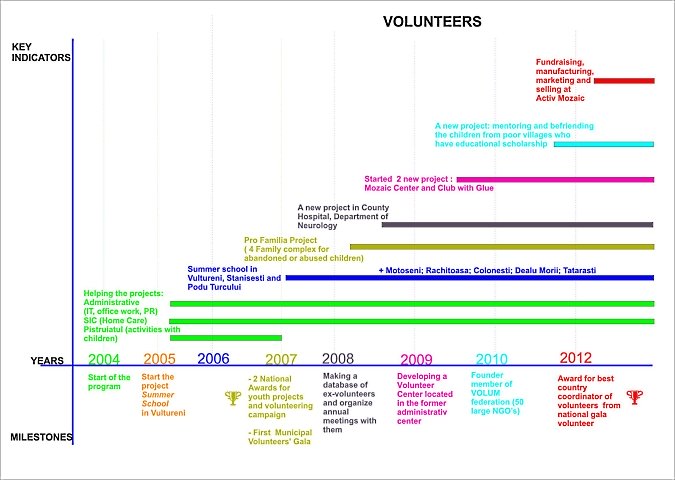 Projects where the volunteers actively participate

Meeting with the volunteers 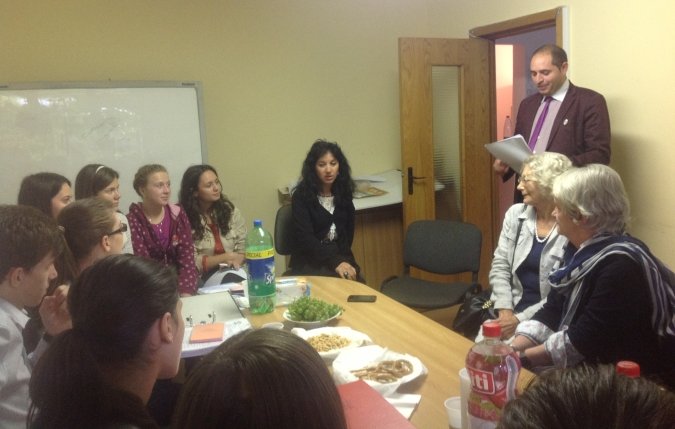 The five volunteers pictured above all offered to speak about some aspect of their work with FSC.

My impression is that this project is an overwhelming success and managed to a very high standard. The volunteers I met were truly inspirational. They are very engaged, polite, respectful and full of enthusiasm. The results in all the projects seem very positive. The Summer School volunteer reports in the September FSC reports make moving reading. There are many examples of former FSC project beneficiaries becoming volunteers.

As Gabi Achihai says, these young people are Romania’s future and to see so many of them engaged in the support and development of the poor, children and sick of their communities can only be viewed as very encouraging and constructive. In fact it is not always their own communities as many of the summer schools’ volunteers express cultural shock on going to the poor rural villages for the first time.

This project networks very well on a local and national level with local government, schools and other volunteer organisations.

If the volunteers encounter difficulties, they told me they are very well supported within the project.

I can only class this Volunteer Project as an inspirational 5 star success with very positive ramifications for the future. I did not detect any particular threats, weaknesses or procedural problems and have no recommendations for any improvements.

"What I love about FSC is that it doesn’t only stick to its projects, but it also encourages other NGOs. I myself have helped with, organised and presented events such as NGO Fest, the NGO Fair, The Volunteer’s Gala etc, that invite other NGO’s to promote their activity and give prizes to their own volunteers. The Volunteer’s Gala even created a competition between all the NGOs for the best project and the best volunteer every year." ...FSC Volunteer report

"In one day I went by the hospital as every week, eager and curious about what was going to happen. I walked into a room where many patients were discussing various topics. Near them, apparently isolated, was sitting a lady bedridden who seemed to be asleep. When I entered, however, she opened her eyes and with her lastly voice she asked about another volunteer. The other patients in the room were stunned when they heard her, confessing to me later that they thought that she was not lucid. After I assured the lady that I was not the one she was looking for, I stayed in that room close to her. She could barely open her eyes or speak, but I could see how she tried to tell me why she had become so and I could read on her face weakness and suffering she had endured … I was impressed by this patient’s will and determination to live, to communicate, finally, to become again what she was before the accident.

A common thing met at most patients at the hospital is the enjoyment of life, but at the same time, the feeling of being trapped in a body that no longer helps, their soul being young, alive and free. Many of those I met there looked at me with nostalgia, remembering the old times when they were young and they believed immortal. Unwittingly sadness overtakes them and the voice begins to tremble, trying to stay strong. Maybe I, unlike other volunteers at the hospital, I have not an experience that marked my life, however of all the stories of the people I met, I remember something. Every tip that patients have given to me I have left in my heart. All stories of life, all the people I've helped (more or less) remained in my heart.

As for what I learned as a volunteer at the hospital, I had a lot to say. First, I learned that every pair of eyes that you meet hide behind them a life story. And with as the eyes which look at you are brighter, the person is stronger. I also learned to observe people and listen to them, showing them compassion and understanding. I learned to put soul into what I do because volunteering without a soul is nothing. I learned that there are much worse things in life than low mark at school or fight with your best friend, and I began to be grateful for what I have. I learned that patients are people, not some game pieces that you take and take them anywhere. Each has its own personality, their own perception and way of thinking. I learned to be responsible. I learned to love life and take care of my health because there comes a time when we will not have it and then will begin regrets. I learned not to cry, smile and move on, I'm focusing on the positive things in my life.

And last but not least, the most important thing I learned as a volunteer is to love people, to be with them and empathize with them and help without requiring anything in return. In fact, this is the essence of volunteering: selfless love to the people around us.

Volunteering at the hospital is a unique and special experience in my life. It is among the only things that really makes me feel useful and appreciated, the gratitude of people's eyes can not be compared to anything else! "